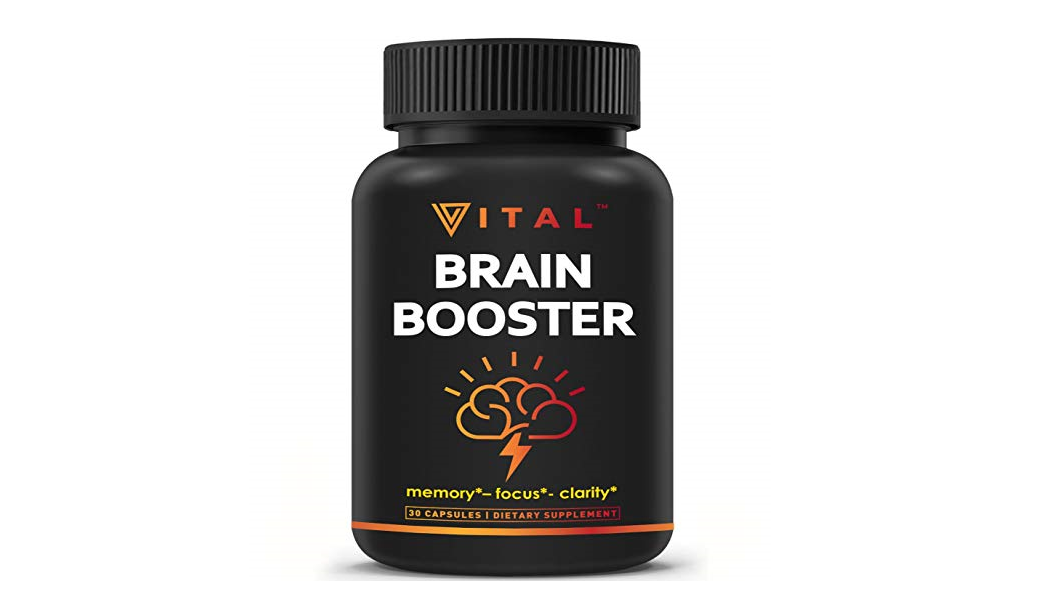 Another good example of a decent nootropic to help you tackle ADHD and other issues connected with your ability to focus, concentrate, or control your energy levels, is the Vital Brain Booster. It isn’t one of the best nootropic stacks we’ve seen but it is great for users looking for a specific effect. The overall properties make it a very specific stack which is advertised as one which has multiple effects – which isn’t true. In terms of ingredients it is dosed well with the ones it has (even has a whole plant extract from Bacopa Monnieri) but it lacks some core nootropic ingredients present in most other stacks. That ironically makes it a not so “vital” supplement but still, for the purpose we are reviewing it for, it is one of the best out there.

Our Verdict: We recommend the Brain Booster to anyone looking for a long-term focus improvement as well as some short-term memory and cognitive effects.

Is this stack is enough to satisfy the needs of some brain hackers and whether the side effects are too much of a risk for someone looking for his first stack? you are about to find out.

The three main things this nootropic stack is aiming at are:

Towards these three claims by Vital there is a solid evidence by the ingredients present here. The solid dose of Bacopa will handle most of the focus, clarity, and memory part while the rest of the nootropics will substitute for the remaining effect potency. Actually, considering the amount of ingredients here, there is a good value to price ratio going on, which is great for the end-consumer.

Rundown Of The Effect

The course of taking the Brain Booster is 30 days, although some people who experience more severe ADHD symptoms can double it (always consulting their physician first, of course).

As a whole the stack itself has a very subtle effect. Usually, this isn’t a good word to describe a nootropic effect but here it actually works for the benefit of the user. Other stacks include caffeine in them as well as other stimulants for very effect short bursts of energy and awareness, just like an artificial “wow” effect.

This, on the other hands, feels good and the effect isn’t sharp and sudden but more of a mild continuous one which gets stronger as time passes by. At the end of your 30-day cycle you will feel more focused, refreshed, and healthier as a whole. The long-lasting effects include improved cognitive abilities, good long-term memory and a good concentration and motivation boost.

This is known as a “no-crash” effect in the neurohacking community. It is what people are after and the Brain Booster by Vital is the master of this effect all thanks to its all right dosage and nothing too shiny and flashy in terms of substances and substance combos.

The serving size here is one capsule, unlike some others which have two or three which can be a nuisance for some people who have trouble swallowing them. There are 30 of those in a single container meaning the course will be 30 days. That, as already pointed out, is enough for most of the effects to kick in.

Who Is It For?

This stack feels like it’s geared towards people who are either new to the nootropics world or want that specific focus-boosting mild effect the Brain Booster contains. Generally, those are either people with attention deficit issues, or ones that want a slight kick in their work output without having to deal with tons of excess energy coming from stimulants.

If you are looking for something to give you a huge surge of studying advantages, check out our Onnit Alpha Brain review.

Is It Adequately Priced?

If you check out our full Buyer’s Guide on nootropic stacks you will see that the Vital Brain Booster isn’t priced high at all. In fact, it is one of the cheapest price per serving stacks we have reviewed and therefore is a great deal for people that don’t want to spend a fortune and get something decent.

Now, let’s talk about the most vital part of this stack – its ingredients. 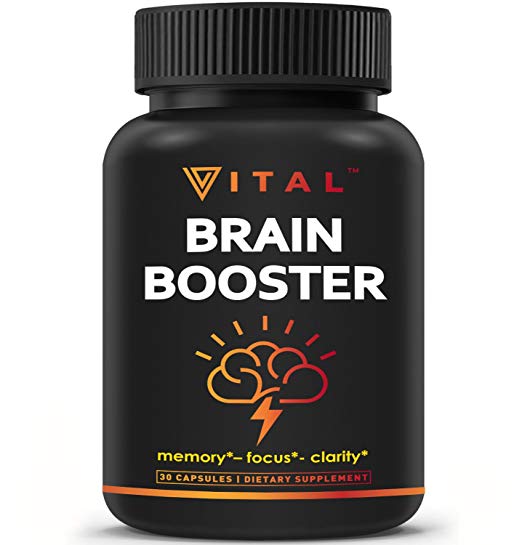 The main nootropic substance here is Bacopa Monnieri but it isn’t the star of the show as it normally is. This stack, unlike many others has a good dose of vitamin B12 which greatly improves its health properties not only when it comes to the brain but the whole body. We highly suggest checking out our Buyer’s Guide to see the full benefits vitamin B12 brings to your body.

The 300 mg of Bacopa Monnieri here are great and can help with many things like memorizing information, recalling facts, concentrating easier and keeping your attention fixed at a single task for more than just a few minutes. Still, at 300 mg this nootropic feels a little underrepresented in the stack but the whole theme of the Brain Booster is to be subtle and the effects to be mild and more prolonged in time. If you want a more sudden and fast effect you can double the dose. That won’t exceed your daily limits for all of the supplements here.

There is a soy-derived phosphatidylserine which has an important role in brain cell’s health and the fluidity of the cell’s membranes. Taking this as a supplement is proven to prevent neurotoxins build up.

The 24% ginkgo biloba extract will help with short and long-term memory as well as keep your brain healthy by providing enough blood and oxygen to it. It also enhances the mental focus of a person and boosts productivity.

R.Rosea is a great adaptogen and it helps you overcome high stress levels and fatigue of the brain. That results in clearer thinking, more focus and concentration.

DMAE (or dimethylaminoethanol Bitartrate) isn’t exactly a nootropic but it is a good addition nonetheless. It helps the brain to handle hyperactivity better by improving the cognition performance after intense periods of activity. In the dose it is here, though, it probably won’t do much difference.

Now, let’s talk about the side effects some users have been reporting about this nootropic stack.

Are The Side Effects Real?

Even if natural nootropics are far safer than some conventional drugs they are still chemical compounds and can still cause potential side effects.

DMAE is known to cause side effects in a small group of people, which is still worth mentioning. These can range from headaches, nausea, irritability, through lack of focus, all the way to loss of motivation. Which in itself is ironic since this nootropic stack is considered great for people with ADHD and it has lack of focus and hyperactivity as a side effect.

There are also traces of lecithin listed as an allergen. Another thing that can cause issues is the whole plant powder from bacopa. Usually, in this industry companies use standardized extracts because that way they can take as much as they want and mix it up to form a nootropic substance. Here though, it isn’t like that and the whole plant powder can prove too much for some people’s digestive tracts. If you experience stomach bloating or discomfort, we recommend picking a stack with less than 200-250 mg of B.Monnieri.

Let’s see what the pros and cons of the Brain Booster are now: 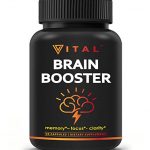 If you are new to the nootropics world and want something with not so high doses but also want a very specific effect geared towards your lack of attention, motivation, focus, and short-term memory, the Vital Brain Booster is a good place to start from. Sure, it isn’t your ideal full-spectrum nootropic but it comes at one of the best prices per serving on the market and doesn’t have extra weight on it in terms of filling content to create proper dosage. As a whole, due to its potential side effects we gave this stack four out of five stars rating.