Another great supplement for those who want to endure long studying sessions is the Neura-Spark by Nutra Champs.

It is a very potent nootropic stack that has a very familiar list of ingredients inside. We have seen that specific formula or other variations of it in most other nootropic stacks that aim to boost short and long-term memory, as well as one’s ability to focus and maintain concentration throughout a long night of studying.

With a core ingredient of Bacopa Monnieri, the Neura-Spark is on the right path to being a stack that helps people with high-intensity brain work in their everyday life.

Our Verdict: The Neura-Spark is an ideal stack for those who aim to boost their productivity, concentration, and long-term memories Students, workers on psychologically demanding jobs all benefit from the effects of the ingredients in this stack.

It is a little underpowered when it comes to doses but that makes it the perfect introductory product to the nootropic world.

In this review, we’ve covered some of the most important features of this stack, as well as talked about its ingredients in a more in-depth manner.

However, if you are interested in nootropics in general and want to learn more about them, head over to our Buyer’s Guide where you will get tons of tips and information on the topic.

Right from the start, you notice one thing about this product – that it is incredibly cheap compared to other stacks with similar ingredients.

The reason for that seems a little “hidden” at first but once you take a look at the supplements list you will realize that despite having some very strong nootropics inside, the Neura-Spark isn’t very generous with the doses of those same nootropics.

Its core ingredient, Bacopa Monnieri, is merely 300 mg which is good for most people but barely enough for people who are looking for very strong and fast-acting effects.

Still, the formula itself is very premium. What’s inside are some of the most well-known, well-researched and potent nootropics as of today and the brain-boosting effect is real no matter at which moment people start to feel it.

Rundown Of The Effect

As with most nootropics, you won’t feel a sudden change in your cognitive abilities but will rather experience a mild mood boost at first and then gradually feel as if you remember and recall more and more information.

This product is designed to work in the long term, especially for your memory. The short-term and more fast-acting effects are associated with your brain’s energy levels and the balancing of the mood you will feel.

In other words, this stack is optimized for people who want a slight energy boost while they are absorbing huge chunks of information and who also want that information to stay in their heads for a little while longer.

The Science Behind It

As we already pointed out, the nootropics in this stack are all very familiar to the science and medical worlds. B.Monnieri is a substance that undergoes constant testing due to its rising popularity among neurohackers. The formula here is also proven to work countless times and is the main reason Nutra Champs is using it in its product. In other words, the company best on a safe strategy instead of trying out something new, which we respect.

This product has the side effects associated with nootropic stacks in general but is also safe for daily use by people who have no prior experience with such supplements. We will talk about those side effects in a moment.

In terms of substances, this stack is very good but, as we said, it can’t back up its nootropics with high doses. Inside, there are:

Bacopa Monnieri is a solid choice for a core nootropic. It is used by a lot of companies and its effects on memory are well-proven. It also helps you recall facts faster and helps people dealing with memory issues get back to their normal lives. 300 mg isn’t much but isn’t little either. It is well-enough to manifest effects in new users within the first few weeks.

Ginkgo Biloba has a dosage of only 50 mg, yet other stacks that rely on it have a dosage of more than 300 mg. Still, it is believed that this nootropic helps people deal with anxiety, stress, and even depression.

A nootropic that mimics the effect of St. John’s Wort is Rhodiola Rosea. It helps with the same things but has been thoroughly tested both clinically and in the neurohacking community.

Still, as with most of the other ingredients, the dosage of it is just too low. What would have an effect is maybe twice the dosage. This is again our main concern with this stack. It just is very underpowered in terms of nootropic concentrations. What would take you 3 weeks with other good stacks will take you 6 here.

Ginkgo Biloba is one of the most well-known and well-studied nootropics today and its presence here is more than welcomed. It has a good effect on the brain’s blood flow and boosts memory as well as awareness. Again though, the concentration is just too low.

Phosphatidylserine, DMAE, Acetyl L-carnitine, and Huperzine-A are all present (in low doses) to help the brain with all its functions. In combination, these compounds help with nerve regeneration, nerve creation, blood flow, cognition, stress, and other processes that the brain handles daily.

Vitamin B12 is another welcomed addition and is the only substance here that is in adequate doses. In fact, it is a little overdosed but too much vit. B12 won’t damage anything.

Last on the list is the Gotu Kola, which showed promising results about it being a great supplement to treat anxiety, mood swings, and memory issues.

Now, let’s talk a bit about the potential side effects of this product.

In terms of side effects there are a few things to worry about here. Huperzine A is an acetylcholinesterase blocker meaning it blocks the enzyme which is responsible for breaking down ACh.

Acetylcholine is associated with learning and remembering and the higher its levels the better, well… in most cases. The thing with Huperzine A is that it removes the brain’s ability to deal with excess Acetylcholine meaning that it will just pile up and there will be no way of removing what’s left unused.

This can be a dangerous thing since too much ACh can lead to headaches, lack of concentration, confusion, drowsiness, and other similar symptoms.

This is why we prefer nootropics that don’t include Huperzine A, but with Neura-Spark the ACh concentration isn’t too much to start with and therefore it won’t be able to get too much before your brain uses it.

A thing that prevents all that is the so-called cycling of Huperzine-A. If your stack doesn’t contain it, you can take it separately for 4-5 weeks and then take a week off and repeat that until you stop taking your nootropics.

One last amazing feature that we want to share is the fact that all of the Nutra Champs’ nootropic stacks come with a lifetime guarantee. This really shows a new level of confidence this company has above the rest.

If you aren’t satisfied with either the short or long-term results, you can contact them and get your money back.

And now it’s time to check the most notable pros and cons of this stack: 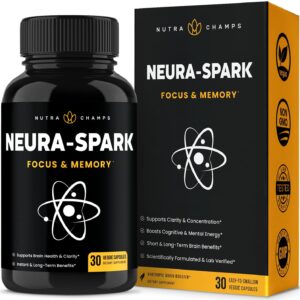 Neura-Spark is a good nootropic stack that comes with a rather large list of substances inside of it.

It helps people with studying, working, and focusing but to feel its full effect you will have to take it for a few weeks.

That is mainly due to the fact that although it has some of the best nootropics inside, they are mostly at low amounts.

Still, for people who are new to nootropics and want to start off lightly with a proven to work stack, this is a very good choice.

Students will also appreciate the price of this product as well as the lifetime warranty they are getting with it. If no effects are felt there is a refund available with just a single phone call.

We gave the Neura-Spark four and a half out of five stars rating.

Taylor is a neurohacking expert who has been in the world of nootropics since it gained popularity almost 10 years ago. He overcame his ADD, procrastination and lack of focus with nootropics. Now, he is sharing his knowledge and experience here at NootroPicks.com to help others navigate the world of cognitive enhancement.
View all posts
Summary
Reviewer
Nootropicks.com
Review Date
2018-10-15
Reviewed Item
Nutra Champs Neura-Spark Nootropic Stack
Author Rating
4

What Nootropics Increase Dopamine: Motivation in a Bottle