Proteins, carbohydrates, water, and salts make the other 40% and weigh around 3 pounds. The brain is not a muscle but a collection of neural tissues.

General Functions of the Brain

The brain receives sensory inputs from the whole body, compares them, and generates motor outputs.

Main Divisions of The Brain

The brain has three main divisions: the forebrain, midbrain, and hindbrain.[4]https://www.ninds.nih.gov/Disorders/Patient-Caregiver-Education/Know-Your-Brain

Each of these divisions is further divided into functional parts that bring about the overall activity of the brain.

The forebrain makes the largest division of the three. It is also called prosencephalon as it develops from it in prenatal life.[5]https://www.sciencedirect.com/topics/neuroscience/prosencephalon

The prosencephalon further divides into telencephalon and diencephalon.

The telencephalon gives rise to the cerebral cortex whereas the diencephalon forms the deep structures of the forebrain such as the thalamus and the hypothalamus.

The forebrain is further divided into three main parts: the cerebrum, thalamus, and hypothalamus.[6]https://qbi.uq.edu.au/brain/brain-anatomy/forebrain Each of them is discussed below.

The cerebrum is the front part of the brain and is composed of the right and left hemispheres. Each hemisphere has an outer cerebral cortex. Basal ganglia are present deep to the cortex in each hemisphere.

These are a group of nuclei situated deep in the cerebral cortex. These nuclei include putamen and globus pallidus, collectively called the lentiform nucleus, caudate, substantia nigra, and subthalamic nuclei.

All of these are concerned with motor control, motor learning, emotions, behavior, and executive functions.[7]https://www.ncbi.nlm.nih.gov/pmc/articles/PMC3543080/

The cerebral cortex has multiple folds thus, it has a large surface area.

The cerebral cortex makes 50% of the total weight of the brain.

The cerebral cortex has lobes that are specialized in their specific functions.

Thalamus is a part of the diencephalon. Thalamus has several intra-thalamic nuclei.

With the assistance of nuclei, the thalamus performs the relaying of motor and sensory signals and the regulation of alertness and consciousness.[12]https://www.ncbi.nlm.nih.gov/books/NBK549908/

It is the master control center of the brain. It is involved in homeostasis and regulates blood pressure, water balance, and temperature.

It achieves this task by influencing endocrine outflow by controlling the pituitary gland and autonomic and somatic behavior.[13]https://www.ncbi.nlm.nih.gov/books/NBK525993/

Midbrain is also called the mesencephalon as it develops from it in prenatal life.[14]https://pubmed.ncbi.nlm.nih.gov/30252280/

Midbrain is located between the forebrain and the hindbrain. It is also part of the brain stem.

Midbrain has two major parts which are named tectum and tegmentum.

It forms the back of the midbrain and has two swellings called superior and inferior colliculi.

The superior colliculus gets afferents from the retina and visual cortex and is involved in visual reflexes.

The inferior colliculus receives both crossed and uncrossed auditory fibers and relays information to the thalamus.[15]https://www.britannica.com/science/inferior-colliculus

This region of the midbrain is present in front of the tectum. It is further composed of nerve tracts and three distinct regions.

These regions include the red nucleus. Substantia nigra, preaqueductal grey.

The midbrain plays an essential role in sensory and motor control pathways. It contains structures that are involved in movements regulation. It serves as a passage for the impulses between the spinal cord and higher centers in the brain. It is also concerned with consciousness and sleep.[16]https://pubmed.ncbi.nlm.nih.gov/31855353/

The hindbrain is also called the rhombencephalon as it develops from in prenatal life.

The hindbrain further consists of the pons, medulla oblongata, and cerebellum.

The pons and cerebellum develop from the metencephalon, whereas the medulla oblongata develops from the myelencephalon.

Both the metencephalon and the myelencephalon are subdivisions of the rhombencephalon.[17]https://nba.uth.tmc.edu/neuroscience/m/s2/chapter01.html

As already discussed hindbrain has three parts, the pons, medulla oblongata, and the cerebellum

It is also called the “little brain” and is present under the cerebrum at the back of the skull.

The cerebellum is an ancient part of the brain with the cerebral cortex developed of it as humans evolved, so it performs primitive functions in the human body besides its advanced functions.[18]https://www.ncbi.nlm.nih.gov/mesh?Db=mesh&Cmd=DetailsSearch&Term=%22Cerebrum%22%5BMeSH+Terms%5D

Like the cerebrum, it also contains cortex and deep nuclei.[19]https://grants.hhp.uh.edu/clayne/6397/unit5_files/cerebell.htm

The cerebellum is thought to possess three lobes, the anterior lobe, the posterior lobe, and the flocculonodular lobes.[20]https://www.sciencedirect.com/topics/neuroscience/cerebellum

These lobes are separated from each other by two fissures. These fissures are named primary fissure and posterolateral fissure.

Functional areas of the Cerebellum

Cerebellum has three functional areas. Cerebrocerebellum is the largest area and is involved in planning movement and motor learning.

It is also involved in the coordination of muscle movements. The spinocerebellum is the one that allows error corrections and thus regulates body movements.

The cerebellum’s primary purpose is to regulate and monitor motor functions.

Initially, it was believed that the cerebellum’s central role is in coordinating movements.

Now, however, it is believed that it performs various functions that include balance, posture, motor learning, reflex memory, emotional processing, and sequence learning.

The cerebellum can also predict the fate of a particular ongoing movement and can adjust it if needed.[22]https://nba.uth.tmc.edu/neuroscience/m/s3/chapter05.html

It is a part of the hindbrain and is located in front of the cerebellum. In the brain stem, it is between the midbrain and the medulla.[23]https://www.sciencedirect.com/topics/neuroscience/medulla-oblongata The transverse section of pons divides it into two areas, the dorsal and ventral.

Pontine nuclei are present in the ventral portion. This area also has corticopontine and corticospinal tracts. It is bulky in appearance due to pontine nuclei.

Pons provides a variety of body functions. It is involved in communication for the center of the brain, focusing vision, balance, blinking, breathing regulation, sleep/awake cycles and facial expression.[25]https://www.ncbi.nlm.nih.gov/pmc/articles/PMC4270924/

Pons gives rise to 10 cranial nerves that go to the face, neck, and trunk.

The medulla oblongata is a part of the hindbrain. It is present in the posterior cranial fossa and is the terminal part of the brain stem. It is inferior to pons and anterior to the cerebellum.[26]https://www.ncbi.nlm.nih.gov/mesh?Db=mesh&Cmd=DetailsSearch&Term=%22Medulla+Oblongata%22%5BMeSH+Terms%5D

Functional Areas of the Medulla

Medulla has many nuclei that have information coming from the spinal cord as well as higher centers of the brain.

These functional areas of the medulla include:

The abducens (VI), facial (VII), and vestibulocochlear are the cranial nerves that exit at the pons-medulla junction. XII, X, IX, and part of VIII cranial nerves have their nuclei situated in the medulla.[27]https://www.sciencedirect.com/topics/agricultural-and-biological-sciences/medulla-oblongata

It regulates the basic functions of the autonomic system that include heart rhythm, blood flow, and breathing.

This part of the brain also detects changes in blood oxygen and carbon dioxide levels. Medulla also originates reflexive responses such as coughing, vomiting, and swallowing.[28]https://www.hopkinsmedicine.org/health/conditions-and-diseases/anatomy-of-the-brain[29]https://www.medicalnewstoday.com/articles/brain

How To Keep The Brain Functioning and Healthy?

Brain health is as important as physical health. A healthy brain could prevent memory loss and prevent several other chronic conditions.

A person can follow these guidelines to keep his brain healthy and functioning.

The brain is the most complex structure in the human body. It has three main functional parts named forebrain, midbrain, and hindbrain.

These parts perform their above-mentioned individual functions and bring about the human body’s daily activities that ensure its survival.

Thus a healthy brain must be maintained to live a carefree life. 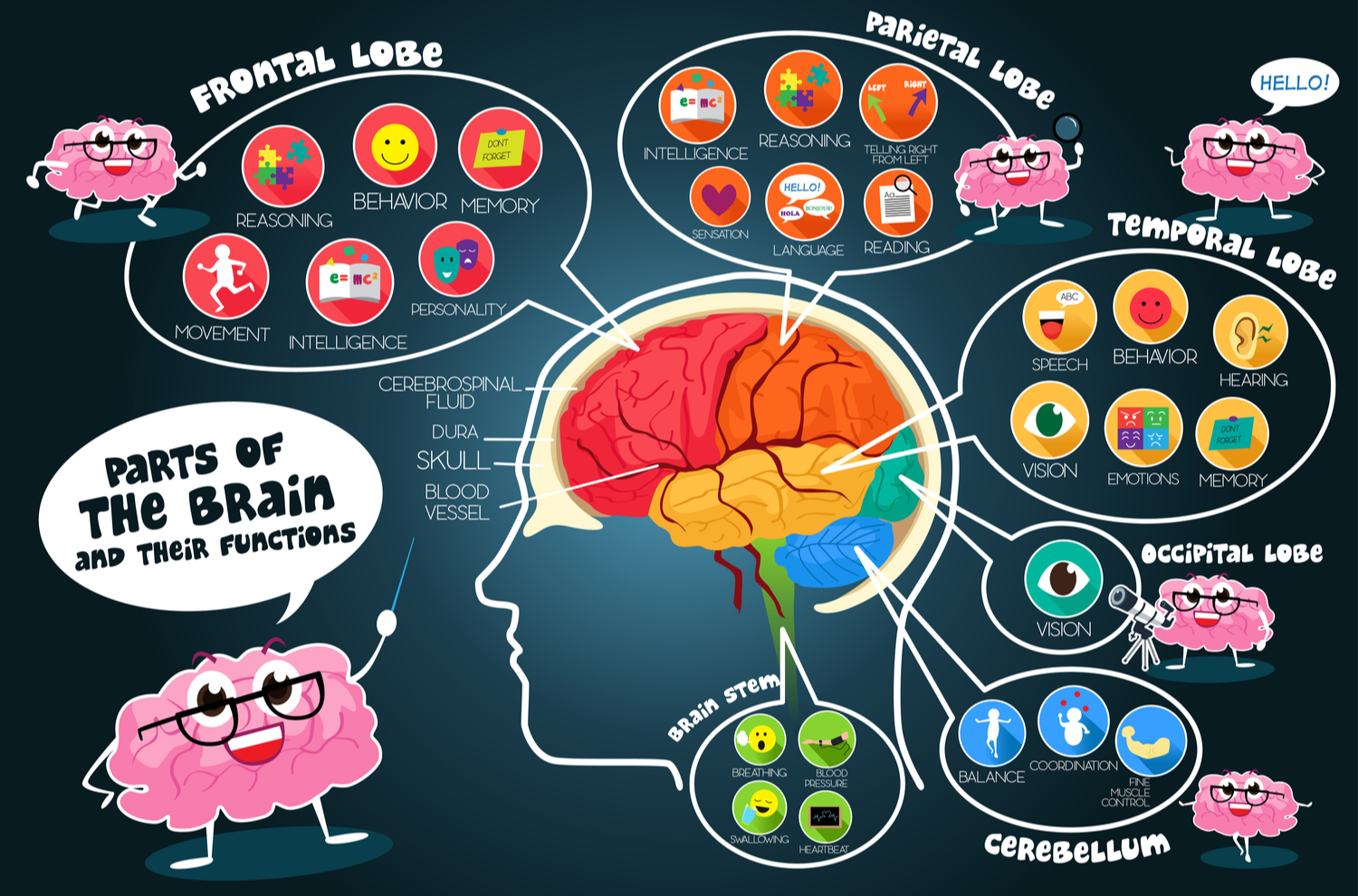 Article Name
The Brain and its Parts
Description
The brain has three main divisions: the forebrain, midbrain, and hindbrain. Each of these divisions is further divided into functional parts that bring about the overall activity of the brain.
Publisher Name
Nootropicks.com
Publisher Logo

What Nootropics Need to Be Cycled: Giving Your Brain a Break