People have been struggling with ADHD for a long time but in the last 20 years, the number of patients with this condition has skyrocketed due to a variety of reasons.

There are traditional drugs that help contain different aspects of ADHD but some nootropic stacks have been gaining more and more popularity due to their balanced more natural effects on the patient’s brain.

Another great thing about going down the nootropic path is that there are far fewer side effects than what traditional medicine can offer you. “Neuro Shroom” by Primal Herb is a new brain-enhancing supplement that helps improve the brain’s cognitive capabilities.

It has a potent effect which is created thanks to its six ingredients, half of which are well-known and well-studied mushrooms.

Our Verdict: We recommend this nootropic stack to anyone dealing with any form of ADHD. The Neuro Shroom stack helps with all sorts of brain issues including stress, lack of concentration and focus, too little or too much energy which is out of the normal and even enhances the short and long-term memory of the user.

Keep reading our detailed review about this stack to find out what all of its features and ingredients are and what makes it special in today’s sea of nootropic supplements.

First of all, it is important to know a little more about the manufacturer of this stack. Primal herb has been around for quite some time now and their products have gained tons of popularity in the neurohacking community mainly due to the well-balanced beneficial effects their products bring.

The products coming from them are known to go through numerous tests and procedures to ensure the utmost quality and steady effects to its users.

The processes through which their herbs and fungi go are the following:

All of these are geared towards the end goal of their products which is potency at the most adequate concentration and dose levels.

Another great thing about this company is that their products aren’t lab-grown. Furthermore, they don’t use fertilizers or any sort of other chemicals to treat their products before using them nor do they use any type of fillers, gluten or other GMO products to increase the volume of their capsules.

In the creation process of their pills and capsules, there are also no animal products used and therefore the company is really proud (and rightfully so) that they are a hundred percent vegan.

Now, let’s dive into the most important part of this stack:

Not only are the ingredients here very well-picked and work in a good way but they also cooperate to create a better, stronger, and more long-lasting effect than each of them individually.

They are divided into two parts

Let’s take a look at each of those two parts now.

The first mushroom here is Lion’s Mane. It also is the biggest fraction and therefore the core nootropic in this stack.

It is responsible for nerve growth and regeneration thanks to the promotion of NGF production. This improves the overall health of the brain as well as the protection from stress and other damaging factors.

As a direct result to that, you can expect increased mental energy, improved concentration, focus, and memory.

There are also results pointing to the fact that this mushroom protects the myelin sheath of the nerve fibers leading to better nerve signal traveling and therefore better reflexes from the muscles. This is why a lot of athletes are using Lion’s mane in different shapes and forms.

The next mushroom on the list is Cordyceps Sinensis which is a fungus used for hundreds of years in traditional Thai medicine. Its general effect is stress-relief as well as less mental fatigue. Just like Lion’s Mane it improves focus and boosts concentration and productivity levels.

Rounding off this fungi trio is the Ganoderma Lucidum, also known as “Reishi”. It has a slightly different effect than the other two as it is mainly targeted at our immune systems giving us a great boost there.

It works well against inflammations and protects the brain and the nervous system from such occurrences.

The Non-Mushroom Part Of The Stack

Even though the name of this stack suggests that it consists of mushrooms only, there are three non-mushroom nootropics here which can be considered a filler by some but at the same time they have special properties of their own.

The first of these three substances is actually black pepper. It is known that piperine is an active alkaloid that helps with the absorption of the other ingredients present here.

That is a very nice touch from Primal Herb as most companies don’t really care about how your body will handle their nootropics; they just cram as much as they can in a single stack and call it a day.

Here, you can see an actual effort put into making this stack as bioavailable to your body as possible.

The second non-fungi substance here is Huperzia A. It is a well-researched Japanese supplement that helps with the effects of the brain-enhancing mushrooms present in this stack.

This herb, known as toothed clubmoss, is used in traditional Chinese medicine as a remedy for nerve regeneration and stress relief.

It doesn’t have an effect as strong as the first three mushrooms here but it is potent enough to add a little on top of their effect. A great effect of Huperzia A is that it helps with memory loss and therefore is very well-received among people with Alzheimer’s.

The last ingredient is perhaps the most well-known out of all six. Bacopa Monnieri is known as water hyssop in English but is widely referred to as just “Bacopa”. It has numerous effects on our bodies which all result in a healthier mind.

We’ve covered its properties, as well as the ones of all other nootropics on this list in our Buyer’s Guide. There, you will also find a ton of tips and useful information you can put into great use when looking for your first stack.

Due to excess stress or dealing with an untreated ADHD, our nervous systems can be worn out over the course of time. This is why this stack is so beneficial for people.

It not only heals the brain but the body also due to its protective and energy-boosting properties. There are three chemical compounds here which are scientifically proven to work in their own areas:

The effects can be narrowed down to nerve-regeneration, anti-inflammatory, and anti-depressant. That, in combination with the other features of these known nootropics, have resulted in a very uplifting and motivational effect from the Neuro Shroom.

ADHD patients have greatly benefited from it and have had reduced crises.

Taking this stack is done with any form of liquid as it is powder-like. You mix ½ teaspoons with your favorite drink (be it a smoothie, coffee, tea, etc.) and just drink it.

You can take it regardless of the time of the day or eating schedule.

The recommended intake is twice a day but always remember to adjust according to the effects. If you aren’t feeling any different up the dose a bit. You should also remember to always consult your physician before taking supplements of any sort.

Now, let’s see what some of the most notable pros and cons of the Neuro Shroom are:

The Neuro Shroom by Primal Herb is a nootropic stack that can serve as an example to all other companies.

It packs only the most important substances in it and is adequately dosed. All the ingredients inside are well-known and well-tested by the scientific community over the years.

This is why this is one of the most risk-free stacks since it has little (but also known) side effects and the benefits from it are described in great detail by researchers.

As a whole, it is a great value for the money and people with all sorts of issues will see a moderate improvement when taking it for a few weeks. We gave this stack a four and half out of five stars rating. 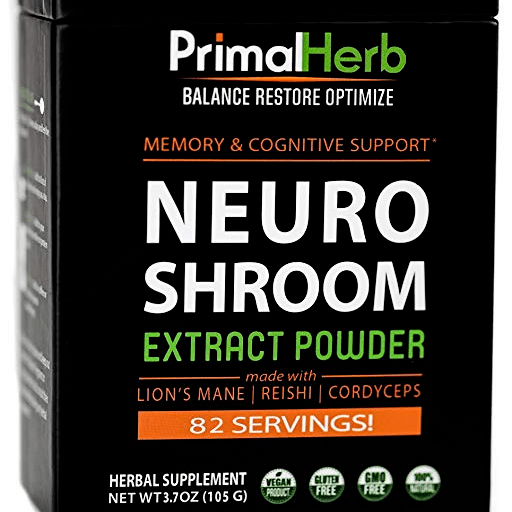 What Nootropics Increase Dopamine: Motivation in a Bottle