It won’t be a valid top 10 nootropic stack chart without including a product from Onnit. We decided their Alpha Brain stack fits best under the studying category since it is really where it excels the most. In fact, from all our other reviewed nootropic products, this one is the most-tested and regarded as the best by almost everyone. The level of research, analyzing and studying of the ingredients of this stack is really in a league of its own and the countless of satisfied users all over the globe serve as a proof to all that. There are a dozen of entrepreneurs, professional athletes, performers, and other people standing behind the brand with due to the boost in their career that it gave them. We will discuss the brand in greater detail in a moment.

Our Verdict: If you are looking for a stack that has been clinically analyzed to the bone and is proven to work, Alpha Brain is a good choice. The combination of substances here is known to help people who need to go over large amounts of information in small periods of time and also helps with concentration, focus, mood, and memory. The only downside is that there are some “filler” substances that aren’t that well-known to the nootropic community which probably does nothing but buff up the price.

Continue with the review to find out what makes this product special, as well as which are its strongest features!

Before we dive deeper into the actual stack, let’s say a few words about the company because trust us, this one deserves it. Onnit has been around for quite some time now and they have established themselves as a leader in sports and performance supplements. They also have sports apparel, training gear, and a lot more interesting stuff on their website.

The company’s newest stack – Alpha Brain has taken the nootropic world by surprise and is still (a few years later) the most discussed thing. Onnit decided to take a turn to nootropic stacks from vitamins, minerals, and other performance-enhancing supplements. Logically, they translated most of their ideas into the Alpha Brain which is a huge win for us – the customers.

The effect of this product is, as advertised, felt in the first week you start taking it. This is entirely due to the ingredients inside but more on those later. Most nootropics start doing any changes after a few weeks, depending on their dosage. For example, the Nutra Champs Neura-Spark has an effect that can be felt after 4 weeks at best since its Bacopa Monnieri (the core substances) is in relatively low dose (300 mg). It isn’t accompanied by anything to boost the overall effect as well, which isn’t the case with the Alpha Brain.

At the second week this stack deepens its effect on the user’s concentration, focus, and short-term memory. If you are taking it during a long studying session you will soon begin noticing that you remember things from the books faster and your reading periods will extend a bit more due to the increased focus. From that point forward, the effects of this stack will just keep getting better and better ultimately resulting in a nice long-lasting effect.

Now, let’s check out which are the ingredients inside this product and how exactly they contribute to the overall effect.

What’s Inside The Alpha Brain

Unlike some other products this stack doesn’t contain caffeine and gluten. The nootropics used here are almost all well-known, well-researched and have proven effects on users. The dosage also seems adequate considering the high price tag.

That being said, there is a ton to digest from the supplement list on the Alpha Brain. In fact, from all the stacks we’ve reviewed this one has the most substances in it. If you ask us, this isn’t necessarily a good thing since the probability of side effects is higher. Also, the effect can’t be balanced that well. Still, this product has made its way to millions of people and almost none of them reported any unwanted reactions or ill effects so it is pretty safe to say that this particular combination of nootropics works well.

The issue we have here is the way Onnit made this product. Instead of listing all the ingredients separately they created these so-called blends which contain all the substances in them and the company just showed you the end dosage for each blend. For example, the “Focus Blend” consists of:

As you can tell, this doesn’t add up to their stated 240 mg, so you pretty much have to guess what the other substances’ doses are.

Anyway, here is a little peek at what this stack contains:

Each serving of this stack is two capsules so what you see on the supplement list as doses is per 2 capsules of Alpha Brain. Let’s get into each of the ingredients now (or the “blends”).

This blend consists of L-Tyrosine, L-Theanine, Oat extract, and Phosphatidylserine. The first two are amino acids responsible for the brain’s cognition abilities. As a whole they serve as fuel to the brain and have a good effect on neuroplasticity and the well-being of your nervous system. PS is also vital for your cognition abilities and when taken as a supplement it improves one’s memory.

This is the most important blend as it contains some well known nootropics. Here, you have Alpha-GPC, Bacopa Monnieri, Huperzia Serrata, and Huperzine-A. These work in combination to create a boost in your abilities to retain information, focus, and remain calm.

This blend serves as the energy source of your brain during intensive tasks. It has L-Leucine which is a primary BCAA (branched-chain amino acid), Vinpocetine which boosts cognition, and Pterostilbene which does the same thing but also lowers cholesterol and glucose levels.

This vitamin is responsible for a lot of reactions but its main role is acting as a coenzyme which is crucial for our bodies to function well. Its range of benefits supplements the effect of the other nootropics in this stack.

This nootropic isn’t one of the most well-known nor is it well-researched but it is said that it can help with inflammatory processes in our bodies. It also helps with our bodies’ energy levels and keeps us fresh during long sessions of hard work be it physical or mental.

If you want a gradual effect and not something sudden and sharp, then 2 capsules (which is a single serving) per day will be sufficient. Still, we wouldn’t recommend taking higher doses due to the amount of nootropics inside. Another important thing is to always consult your physician before taking such supplements as they can lead to potential side effects or reduce the effect of an ongoing medical treatment.

One last important thing concerning the way you take this supplement is that you can cycle it due to some of the ingredients inside. One great way to do it is by taking it for 5 days and rest for 2. Usually that method is the easiest to remember when you take the supplement during work days and rest on weekends. On every 3 or 4 weeks you can take a week off just to let your body process all the extra supplementation you gave it.

Do you want to learn more about the different nootropics present in stacks around the web? Our full Buyer’s Guide will have all the right answers to your questions, as well as tons of useful information and tips for your next purchase!

Now let’s see which are the pros and cons that define this product: 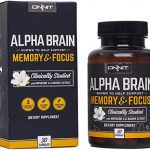 The Alpha Brain by Onnit is a top shelf nootropic which is ideal for people under a lot of psychological stress and have to endure long studying sessions. It boosts one’s ability to concentrate, focus, and also improve short and long-term memories. The cocktail of nootropics inside this stack is premium and is consisted mostly of well-known substances which have been under the crossfire of laboratories for around a decade now. As a whole, the product has adequate dosing, fast-acting effect, premium content but also a premium price tag. If you can spare a few extra bucks for your stacks, this is a great choice. We gave the Alpha Brain nootropic stack five out of five stars.